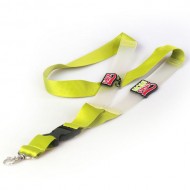 Everybody knows that song “War what is it good for, absolutely nothing, say it again! Hah!” The song was written by Norman Whitfield and Barret Strong and had The Temptations as the original vocalists. Motown Records then decided to re-record the song with Edwin Starr which is the version that was a number one hit on Billboard Hot 100 in 1970. It is also the version that people would be most familiar with today even though artist such as Bruce Springsteen and Frankie Goes to Hollywood also did their own versions. Even Jackie Chan and Chris Tucker did a version in their hit movie Rush Hour and Rush Hour 3. How can forget the Seinfeld episode whether Elaine believes Jerry when he says that Tolstoy originally wanted to call “War and Peace” by the name “War, what is it good for”.

When it comes to lanyards people might ask the same question. They might ask “Lanyards what are they good for”. The difference with lanyards and the title of the hit single by Whitfield and Strong is that lanyards are good for something. Say it again! You see lanyards are a very useful product. One may even say they are the most useful product even to be invented. You see whilst war is not good for anything, lanyards most certainly are. Lanyards have been around for a long time now. People have used them in one form or another for millennia now. People have alway found a need to hang something around their need to keep something close to them. The modern day version is just a refined incarnation of what has been use for a long time now.