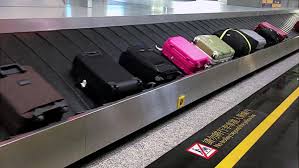 I often travel. Truth be know I like to travel. I go to Hong Kong and China for the fairs. They happen twice a year but I only ever go once. Although this year I skipped due to the current mayhem. I go to Hawaii usually every other year. We used to go every year but have cut back. I have been to Vegas a couple of times for the CES. I haven’t been in a while but would like to go again at some point. I also go to Europe often. In the last two years I have been like five times. Mainly because of family, and having to come back here periodically for work. So I pretty much know what I am talking about when it comes to travel. I have my little routines when I travel. Things that may it easier to travel. One of the things I never forget to do is bring along my personalised luggage strap.

I usually only check in one bag so I only need one luggage strap. I have a white one with some black writing on it. It really stands out so I always take it. I take it for a number of reasons. Firstly I like to keep my back intact. You know those crazy baggage handler, God bless their souls, like to throw the backs around as they are handling them. They also stack them high with other bags. I guess they need to fit them in the aircraft somehow. My worry though is that my bag will burst with all the pressure. That is why I use my luggage strap It keeps it tight and I don’t need to rely on the zipper to keep the bag closed.

The other reason I use a luggage strap is security. You know a few years ago the were issues with people putting stuff in your bag. Then there was the Chappelle Corby incident, and me believing her innocence decided that it would be better to further secure my luggage. Yes I do have a combination lock on my bag but I figure it doesn’t hurt to put a strap and I reckon it would act as a deterrent considering there are other bags that done. Some people wrap their bags with plastic, which in someways is a good idea. I prefer not to waste so much plastic so I use my personalised luggage strap instead. It does the job nicely and I haven’t had any issues yet.

The final reason I use the personalised luggage strap is it makes it easier to identify my bag when I gets on the carousel. You have all the bags on the carousel and sometimes it is hard to figure out which is yours. Most bags are the same colour and there are so many of them so anything to make it easier is welcome. My luggage strap is very distinctive so I notice it straight away. I remember a guy on the TV show “Border Security”. They went to check his bag and asked him if it was his, to which he replied in the affirmative. When they opened it he said it wasn’t his. Obviously they didn’t believe him because she previously said it was his. Long story short, they ended up finding a bag which was identical and had the identical strap on it. I never thought it could happen but there it was. Point being, it is better to have a personalised luggage strap or one that is a bit unique so you don’t suffer the same fate.